The festive season and the countdown to Christmas is well underway and Triple E have gone underwater to provide a magical window display in the centre of the West End. 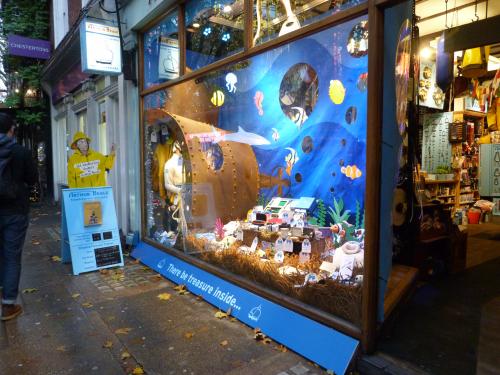 You wouldn't usually associate Shaftesbury Avenue with a yacht-chandler, but Arthur Beale Ltd has been situated here for over 400 years. Traditionally known for manufacturing ropes for ships, climbers and explorers the company often takes advantage of their unique central London location to supply the local West End theatres with specialist rigging.

Under the leadership of Alasdair Flint, a theatrical chandler who also has a passion for sailing, the company has revived itself in recent years to provide rigging and ropes to the theatre sector alongside their more traditional sailing business. And each Christmas the company draws on this theatrical side and puts on a window display to rival any other shop in Bloomsbury or the West End!

Triple E has worked in collaboration with Alasdair Flint to provide a magical underwater themed display based around "20,000 Leagues Under the Sea".  As a leading provider of drape and scenery tracking to the theatre sector, Triple E has frequently been known to provide tracks to support other well-known West End retail emporiums such as Harrods and Selfridges with their 'wow factor' window displays.

Triple E was charged with specifying and building a chain track system to allow the aquatic life in the window display to be in continual motion. ChainTrack is Triple E's proprietary tracking system and was perfect for the very precise and continuous movement of scenic elements, and fish in the underwater scene.  All of course designed to capture the eye of passing Christmas shoppers!

The idea was conceived following an informal meeting between Arthur Beale's Alasdair Flint, and David Edelstein, Managing Director, Triple E.  As Alasdair says "Initially we laughed about the concept of installing a track in our shop window! But within a week, we had conceived a shop front display which needed exactly that – a moving submarine and diver surrounded by swimming fish! Triple E was able to provide a simple 'plug and play' system which was rigged quickly and easily into our window, with minimal disruption, and provided a solution to match our specifications perfectly."

The Triple E ChainTrack system consists of a machined UHMW section, which carries the upper portion of a duplex roller chain, inserted into an aluminium extrusion designed and extruded exclusively by Triple E.  Whilst this particular installation involved relatively light loads, the system can carry a maximum permissible load of 20kg per linear metre, meaning it is the perfect solution for the heaviest of theatrical uses.

Alasdair is delighted with the outcome, "The track went up a dream, it was simply a matter of securing four hanging points, plugging it in, and that was it! We are all impressed by its totally silent and smooth operation. We would love to use it again."

David concludes, "The team at Triple E have known Alasdair for over 30 years and we were excited to contribute the critical element of movement to his latest Christmas window display.  It is fun, and it is quirky, and our Chain Track system really did bring the magical underwater scene to life! This has been a perfect showcase, in the heart of the West End, for us to demonstrate the flexibility and ease of installing the Chain Track system, even into small spaces like shop window fronts."