UniTrack on track for world premiere

Manchester International Festival (MIF) is the world’s first festival of original, new work and special events. An artist-led festival, MIF is staged every two years at venues across the city and presents work from across the spectrum of performing arts, visual arts and popular culture. 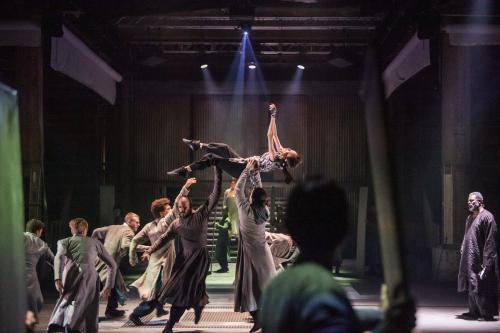 A major commission at this year's festival had an urgent technical requirement, which Triple E were only too pleased to support.

Jack Thompson, MIF's Technical Director, explains. "We had an urgent requirement for a replacement system for some rollers for the world premiere of "Invisible Cities", which we produced with 59 Productions and Rambert and staged in the Mayfield, an abandoned railway station. We needed a speedy response from a reliable supplier. Triple E fell into the frame pretty quickly with their UniTrack system. Both Niall Black our production manager, and I have used it for many years, we knew it would work and it's a great product. We also knew that the exceptional service Triple E provides would mean it could be obtained and installed within the very short time frame we were dealing with."

Production Manager at MIF19, Niall Black, couldn't be more impressed. "Within 24 hours of us making the call, the installation had been completed. UniTrack is so simple to install, 10 hours after it arrived on site, all of it was up in the air and working, which, on a dead hung grid in a space the size of Mayfield Railway Station, with a specially constructed canal running down the middle of the 40 m x 15 m stage was not the easiest of asks. But a five-man team working overnight from UK Rigging had it up and rigged ready for rehearsals the next day."

"We were so delighted to be able to turn around such a large order in a very short time. I am immensely proud of our staff who all pulled together to ensure the track and parts left within an hour of the order being confirmed," adds Brenda Edelstein.

The 8 track systems provided by Triple E were used for the movement of draperies that were being lit and projected onto. The show, including the track, will be moving onto other festivals and can next be seen at Brisbane Festival in Australia at the end of September.

Jack Thompson is delighted with the benefits the tracking provided. "UniTrack was perfect for our needs – it was easy to install, works effortlessly and is very quiet. We can't fault the service we got from the team at Triple E. One call to Triple E and they had a van leaving London for Manchester within the hour with 128 meters of track and all the associated parts."

For all your requirements contact us now to discuss your project specifications.